In May 2020, BEEP Doctor Theo Weston was called by Northwest Ambulance Service (NWAS) to a farm near Penrith to a farming accident where a farmer had seriously injured his right forearm.

Unfortunately, he had accidentally slipped & put his right arm into a machine used for chopping up hay/straw/grass. This resulted in his forearm being almost completely severed off, only being held on by one blood vessel & a thin strip of tissue.

The NWAS paramedics along with advanced interventions performed by Dr Weston, they were able to temporarily reattach the arm and splint it in a normal anatomical position. As it was night-time and no Air Ambulances were flying, they drove for over an hour in a land ambulance to the nearest Major Trauma Centre, the RVI in Newcastle, maintaining pain relief & circulation to the arm as best they could all the way. 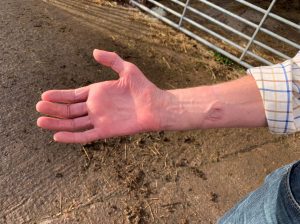 He was rushed straight into theatre and after several hours of intricate surgery, the specialist surgeons in the RVI were able to reattach & save his forearm. At the time of writing, 6 months on, he is back working as well as driving his car and has a lot of his movement & sensation back in the damaged arm. If these advanced interventions hadn’t been performed at the scene & if he hadn’t been taken to the RVI he would most certainly have lost his arm.

We’ve Got A Little Bigger! »

We use cookies to ensure that we give you the best experience on our website. If you continue to use this site we will assume that you are happy with it.OkPrivacy policy